Chase joined the firm as a law clerk in 2019. Prior to that he worked as a compliance analyst for an international correspondent bank in Topeka, Kansas, where he handled extensive due diligence matters and ensured compliance with federal banking regulations.

An experienced orator and competitor at heart, Chase competed at a national level in both National Forensics Association-Lincoln Douglas debate and American Mock Trial Association Collegiate Mock Trial. Chase was Captain of his Mock Trial and Debate teams for three years. While in law school, Chase served as President of the Washburn Law Moot Court Council. He also competed on the ABA Employment Law Trial Team. Committed to integrity in the profession, Chase served as a member of the Washburn University School of Law Honor Code Committee. Upon graduation, Chase was inducted into the Order of the Barristers in recognition of his excellency in Oral Advocacy. 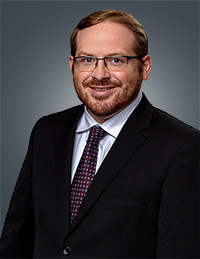 Everyone knows someone who has encountered law enforcement. Criminal charges and investigations often bring anxiety and uncertainty to the accused and his or her family. For this reason, it is essential to promptly find an experienced partner who can guide you through the legal process. The attorneys of Wallace Saunders’ Criminal Litigation Group are here to help. We provide our clients with the clarity needed to understand the criminal law processes and protect our clients by finding the best solutions based on their needs.

An avid cook and BBQ connoisseur, Chase can often be found either trying new recipes at home or searching KC for the perfect burnt ends. At home to unwind, Chase enjoys cheering on the Chiefs and Royals.