Nick began his legal career representing Plaintiffs in personal injury matters. This experience afforded him the ability to see both sides and to advocate for a fair and reasonable resolution. A people person, Nick enjoys getting to know his clients on a personal level and advocating for their best interest. 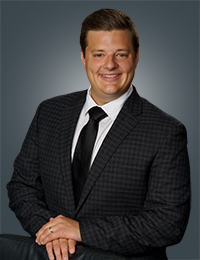 Nick is a sports buff who dives deep into fantasy football every year. He enjoys listening to podcasts, running, traveling, cheering on the Kansas City Chiefs, and spending time with his wife and daughter.

After a weeklong jury trial, veteran trial lawyers Mike Brown and Alyssa Brockert delivered a hard-won victory for their client, a Westport club owner. Plaintiff claimed serious injury due to alleged wrongful detention after failing to pay his bill. The defense team showed that the injury was actually due to plaintiff resisting a lawful arrest. And the defense’s forensic analysis of plaintiff’s financial records established his failure to pay was no innocent mistake. The jury was out for 2 hours, and then exonerated defendants of all claims.

We handle serious claims involving the hospitality industry, protecting business owners against risk of reputational injury and potential asset loss.
For more information or to make an appointment, please call 913-888-1000.

Brian Boos has been selected as a Fellow of the Litigation Counsel of America. The LCA is a trial lawyer honorary society composed of less than one-half of one percent of American lawyers. Fellowship in the LCA is highly selective and by invitation only. Fellows are selected based upon excellence and accomplishment in litigation, both at the trial and appellate levels, and superior ethical reputation. The LCA is aggressively diverse in its composition. Established as a trial and appellate lawyer honorary society reflecting the American bar in the twenty-first century, the LCA represents the best in law among its membership. The number of Fellowships has been kept at an exclusive limit by design, allowing qualifications, diversity and inclusion to align effectively, with recognition of excellence in litigation across all segments of the bar. Fellows are generally at the partner or shareholder level, or are independent practitioners with recognized experience and accomplishment. In addition, the LCA is dedicated to promoting superior advocacy, professionalism and ethical standards among its Fellows.